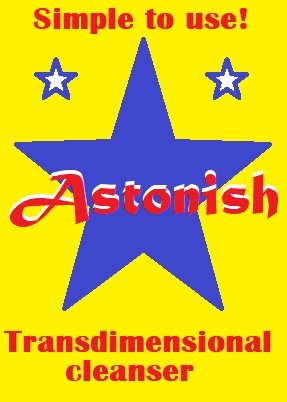 Norman Hollington stopped as he was walking along Convamore Road to his terraced house and sighed, the street was a tip carpeted with condoms, coke cans, takeaway cartons and dog shit.

What this place needs is a bloody good clean up, he had tried to stop people littering on many occasions and usually got threats or a mouthful of obscenities for his troubles.

I wish I could wipe the whole bloody lot clean and start everything again.

Walking past the overflowing litter bin near his home a bright yellow package attracted his attention, it was clean and looked brand new so gingerly he picked it out of the bin to read the writing emblazoned in red across the box.

‘Astonish, Transdimensional cleanser, Simple to use!’ turning the box over he read ‘just open and shake over the brane you wish to erase, use with caution.’

Norman had no idea what a brane was but he could think of a few people whose brains he’d like to erase. He opened the box to see it contained a white powder that looked like soap flakes.

What harm would it do?

He sprinkled some over a pile of rubbish and was pleased to see it disappear leaving a gleaming white… what?

Nothingness, that’s what it was!

He felt a brief glimmer of satisfaction before the swelling white void swallowed him up along with the street, the planet, universe… 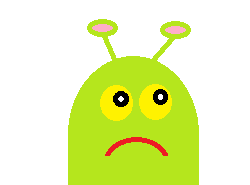 “Oh you’ve really done it this time Zark.” cried Ralphus slapping a tentacle on his head in despair. “Jango’s Emporium is going to sack us all for this.”

“Sorry Ralphus I just put it on the temporal conveyor belt and pressed send. I thought Tiff had programmed it boss.”

“It was supposed to go to Convamrood in the Grimbaria Constellation?” asked Ralphus “Is that where you sent it?”

“I fink so…” replied Tiffinit “spelling’s not my strong point.”