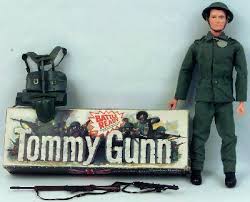 When I was a child in the sixties I didn’t have an Action Man I had Tommy Gunn, in fact I had two of the soldier dolls (as they called them then, now they’re action figures).

The aforementioned Private Gunn came ready for battle with steel helmet and Sterling submachine gun unlike his compatriot from across the pond who was only supplied with fatigues.

Tommy wore the British infantry uniform of the 1960’s with the strangely shaped helmet that was standard issue at the time, the quality  was good, if somewhat lacking in detail (the pockets were simulated by stitchwork) and had press studs not buttons but his rubbery boots actually laced up, unlike Action Man’s plastic wellies which often split when the foot was pushed in. His equipment was contemporary unlike Acion Man’s WW2 period weoponry and well detailed even to the point of removable and easily lost gun magazines and grenade pins (yikes, how non-pc today!) although there was a tendency to use cheap and easily broken materials.

During his short production run, the soldier had access to uniforms from the Guards, Royal Marines, and the Military Police amongst others but didn’t have the wide range available to his transatlantic cousin. The figure never reached the heights of Action Man (GI Joe to you lot across the pond) and was only made between 1966-68 by his original manufacturer Pedigree but was later produced (cheaper in every sense) and sold by Zodiac Toys during the early eighties.

The new pretender came complete with “realistic hair” and uniforms that included the SAS, a spacesuit and even a silver alien figure.

The original figures are quite collectible now and on hindsight I wish I had been a little more careful with them, perhaps launching them off the top of the stairs in Lego vehicles wasn’t such a good idea as one of them sadly died in action during a mission (well after several missions to be truthful). The all American Action Man latching on to his appeal adopted modern British uniform shortly after the demise of the original.

How many other British oldies had/or remember these?

This site uses Akismet to reduce spam. Learn how your comment data is processed.

Author, dreamer and grandad, dreamed up my first book when I was a teenager and finally got around to writing it when nearly sixty, talk about a long game! First book; Sirkkusaga. A racy scifi story. Second book; Love bites. Vampires in modern day London. Third book; The Journals of Professor Guthridge. A ripping tale of supernatural revenge and bloody murder. Fourth book; Sirki's Children, the bittersweet sequel to Sirkkusaga. View all posts by kytwright